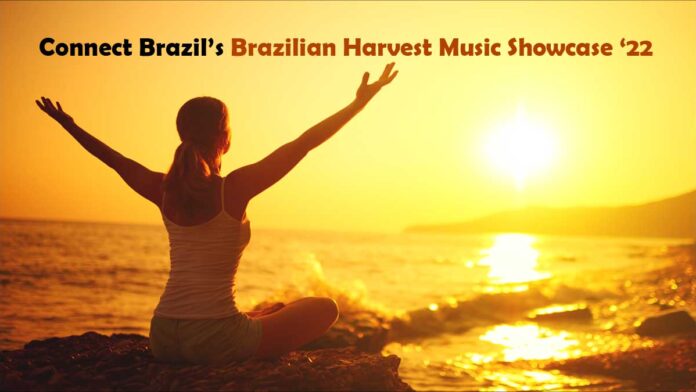 A Handpicked Playlist For The Colors Of Autumn.

Brazilian Harvest Music Showcase ’22. It’s been a ‘bumper crop’ year for great Brazilian tunes. Time to pick a few of the best…

After all, this is the season that does its best to hang on to the warmth of summer before giving way to winter all too soon.

Every song on our Brazilian Harvest Music Showcase ’22 is already playing on our 14 streaming channels and on our always live streaming station at Connect Brazil.

Which of these handpicked songs will make it to your personal playlists this autumn? So go ahead, throw another log on the fire as you sip on a hot Brazilian spiced cider (try our recipe!).

That’s the warmth of Brazil!

When we sat down to plan this first edition of The Brazilian Harvest Music Showcase, we wanted to open it with a signature song. Something in keeping with this special time of year. Nature’s colorful landscapes. Long shadows from the sun’s golden rays. Crisp blue skies.

Finally,  we wanted you to have a say in our choice. So, we asked listeners like you to send us their song suggestions and ultimately, this is the one we selected.

What Brazilea does with ‘Different Worlds’ checks all the boxes and then some. The melody perfectly captures a precious sense of seasonal Saudade, rising up to capture fading memories of summer.

Sometimes you can meet the most interesting people through music. It could be someone you met at a concert or club. Or it might be the new singer you were waiting to meet.

Well, in this case, the wait is over. Meet Tetel. And who is Tetel? Well, meet Marcela Isabele Venditti Sarudiansky, who explains.

“The minute I decided to pursue my true passion, the person I was always meant to be, came alive: meet Tetel Di Babuya.”

‘Meu Cupla’s’ English and Portuguese lyrics are simply brilliant. “Hey baby, how can the Bossa Nova mend our home? Have some faith in my mother tongue. It can do wonders with the right rhythms on.”

Lines like that invite comparison. That one reflects the influence of Amy Winehouse but when you realize that’s just too limiting, you know you may be on to something special.

Cecy Santana is a Chicago thoroughbred. She’s also Paulistano, born and raised in the city of Sao Paulo. That’s the inspiration for her latest Brazilian single. ‘Sao Paulo’ is a welcome addition to the Brazilian Harvest Music Showcase ’22.

Sao Paulo is Latin America’s Big Apple and one of the most-populous metros to be found anywhere. 22.5 million people live and work there. People looking for a place to sit on the same subway, bus, or (God forbid) Uber that you need.

Sao Paulo is also one of the largest geographic centers on earth. SP (essy-pay) is so vast and congested with traffic that cab drivers will only travel in one direction after 12 pm.

But the music? Well, the music tells a different story.

Because not far from the “Muros da Pedra” (walls of stone) is the electric nightlife of Kingston Club. Located in the Pinheiros district, it’s one of the hottest Baladas in SP. There’s a line to get in on any night of the week, and the music sizzles with a Latin vibe. The crowds show up late. Or early, because at 2 am there’s no difference.

That’s when you’d expect to see Cecy Santana lighting it up on stage, with this song and this Chicago band. And all you want to do is dance.

Because words are just words and tomorrow seems as far away as the Uber driver you met yesterday morning.

“The contrast in the song comes from the attitude that most Brazilians have,” says Cecy Santana. “Even though they work so hard to make ends meet, they keep a positive attitude and make the most of life!”

No matter how you look at it, the hits keep on coming for Brazilian jazz pianist Antonio Adolfo. He’s nominated for two Latin Grammy awards, including Best Latin Jazz Album for his 2021 release Jobim Forever.

Antonio Adolfo’s 2022 release, Octet And Originals has already topped JazzWeek’s chart, settling in at #1 week after week. And word has it that Adolfo is in the hunt for next February’s Grammy Awards, too.

Yes, the hits keep on coming and Octet And Originals is filled with them. He explains. “I have honored great musicians such as Antonio Carlos Jobim, Milton Nascimento, Wayne Shorter and others. This time, I am offering you an album exclusively dedicated to the music I’ve composed.”

Adolfo’s music has been a touchstone for American fans since the late-60s when Sergio Mendes and Brasil ‘66 took us by the hand for a walk into Bossa bliss with ‘Pretty World’. Since then, it’s been performed and recorded by Stevie Wonder, Ivette Sangalo, Daniela Soledade, Lisa Ono, Sheléa, and countless others.

Equally impressive, each of Octet And Originals 10 tracks are buoyed by Adolfo’s arrangements, which redefine the ‘number of 8’ into a much larger sound. There’s a Big Band presence that’s unmistakable.

Looking for another hit? Okay. Dionne Warwick famously recorded ‘Heart of Brazil’ for her Aquarela do Brasil album, which featured Adolfo on that 1994 recording. Adolfo’s octet brings a jazz club feel to this new version, with full-bodied horns capturing the melody.

Tucked into Tudo’s playlist, well before a string of songs that define this 2014 album is an autumnal delight. A warm and cozy Bossa Nova love song that finds Bebel at her romantic best for our Brazilian Harvest Music Showcase ’22. Neil Young wrote ‘Harvest Moon’ in 1992.

Bebel Gilberto discovered it several years later when it was included next to her own ‘Samba da Benção’ on the Eat, Pray, Love soundtrack.

“I heard it, and I was like, I love this song,” she told Vanity Fair. “This is the song that made me play guitar for the first time.”

Bebel refers to Sade as her early musical muse. However, this voice and guitar version is so effortless and serene that the compliment could easily be returned. “Because I’m still in love with you, I want to see you dance again on this harvest moon,” she sings.

Listen To The Brazilian Minute: The Story of Brasilia

Guitarist Marc Antoine’s Laguna Beach album was launched mere days into the Fall of 2016, after relocating to California (and his new on-site studio) from Spain.

Check any of Antoine’s recordings and you’ll discover that he has a passion for Brazilian jazz. Most of those songs are originals, but not this one.

It belongs to Baden Powell, one of Brazil’s greatest guitarists. He also composed ‘‘Samba da Benção’’ and ‘Berimbau’.

No words are needed for Antoines’ version, which opens with a respectful nod to Powell’s own original recording. From there, the melody unfolds one note at a time as a breezy Bossa-tinged interplay between acoustic guitar and harmonica.

It’s a great playlist add for a weekend drive to enjoy the colors of the season.

What’s up with MPB? Who knows? Ask that question in Brazil and you’re liable to get a startled “Que?” in response. But Brazilian Pop? That’s a different story, and one well worth telling.

Beyond the headlines of Anitta’s surrogates and the latest Funk Brasileiro, is a small but impressive generation of talented singer/songwriters doing amazing things for the music of Brazil.

One of these is Anna Ratto, who is no stranger to Connect Brazil listeners, whether it be on any of our 14 streaming channels or our live streaming station.

Ratto is gifted with a beautifully nuanced voice and interpretive skills. This arsenal comes in handy for her latest album, a collection of songs penned by Arnaldo Antunes.

Antunes famously wrote songs like ‘Alta Noite’ for Marisa Monte. Together, they make up two-thirds of Tribalistas, with Carlinhos Brown.

Contato Imediato – Anna Ratto visita Arnaldo Antunes showcases his music uniquely. This is Anna Ratto’s first album solely as an interpreter of another songwriter’s creativity. And the two talents align perfectly on ‘O Seu Olhar’. Producing the project is Liminha, who also produced the original version for Antunes in 1995.

Recalling both recordings, Liminha offered these words for Anna Ratto. “Her skill as a singer and instrumentalist helped a lot, and so did her good taste and sensitivity. In short, it was pure art and I am very proud of what we did”.

Stories like ‘Brazilian Harvest Music Showcase ’22’ are what we do. Why don’t you join us? Sign Up for our e-letter. Listen to our ‘always live’ streaming station and our 12 streaming music channels, always free. Browse our Lifestyle Directory. Click here to like our Facebook page and here for Brazilian events coast to coast.