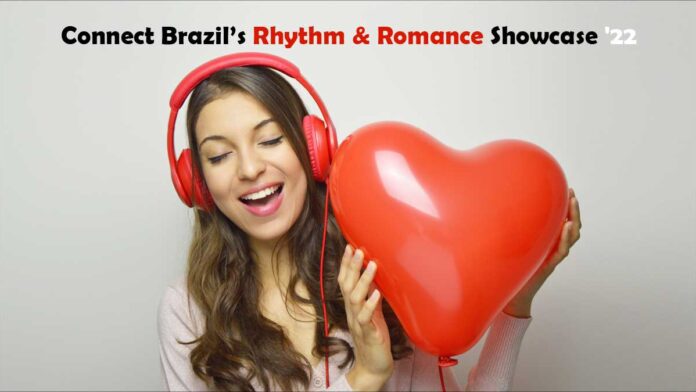 It’s the time of year when we celebrate Rhythm and Romance. Let these Brazilian love songs be your soundtrack.

Connect Brazil’s Rhythm and Romance Showcase ’22 includes a half-dozen of Brazil’s best love songs. Each one is a perfect match with your personal playlist.

Eternal melodies are part of the potion for any love song that makes it to our Rhythm and Romance Showcase 22 list. But why is it that none stir the senses like this Antonio Carlos Jobim classic?

‘Corcovado’ was written for Joao Gilberto to record on his sophomore album O Amor, o Sorriso e a Flor, in 1960. The song gained its second name when Gene Lees created English lyrics for it a few years later.

Surprisingly this visually-romantic radio edit of the version that we know so well was not the first to be heard in English. Actually, that honor belongs to Tony Bennett, just in time for Valentine’s Day in 1963.

But from the very first chord from Jobim’s Brazilian piano, the Getz/Gilberto message is unmistakable. “Stop what you are doing, and listen” it whispers.

And we’ve been doing that ever since.

The next time you’re in Rio de Janeiro on a starry night, gaze upward and take a long moment to reflect on this song. It just might move you to tears.

No doubt about it. Luedji Luna is making a name for herself. This Bahia-born singer and songwriter possess a voice that easily compels you to listen. Brazil’s top musical scribes say that she has a magnetic personality, a rare talent to keep an ear on. They write their stanzas as quickly as she can sing them. It’s been that way for five years now.

But its life’s still waters that run deepest, and that’s where Luna is at her most comfortable. The video above was shot near the city of her birth, Salvador Bahia. A city of generations that’s sacred to both body and soul. A place where both join to create the nation’s creative heartbeat.

Luna filmed this while pregnant with her firstborn. Consequently, it’s easy to think of this love song, ‘It’s Good To Be Underwater’ as autobiographical. “I dance the dance of your tides,” she sings. “You’re a tidal wave, a gentle tide. You’re a tsunami when you don’t care to know.”

Truth be told, we championed Luna’s arrival early last year, well ahead of her Latin Grammy nomination for Best Brazilian Popular Music Album. Then we were thrilled when she performed this song live during the awards show a few months later.

If this is your introduction to Luedji Luna, you may be thrilled too.

If you are a longtime listener to The Sounds of Brazil’s weekly syndicated show, then it’s a pretty good bet that you have a copy of Marcos Ariel’s ‘My Only Passion’ sitting in your collection. Has it been a while since you’ve listened to it?

Then feel free to indulge. That’s what our Rhythm and Romance Showcase 22′ video list is all about.

‘Green Eyes’ captured Ariel’s piano and guitarist Ricardo Silveira at their best when it was released in the fall of 1999. The melody weaves effortlessly between these two musical friends.

There’s an immediate sense of comfortable intimacy here, that’s never been duplicated. A smoothly tropical synthesis of rhythm and romance.

If ever there was a romantic Brazilian jazz song to give us the opportunity to paraphrase Khalil Gibran, it would have to be this one. So we’ll suggest ‘Let there be silence in your togetherness.”

It’s true. There are several Brazilian songs that are perfectly made for such moments. Those quiet moments which define a quality of intimacy that comes from just ‘being’.

Too Zen for you?

Recorded in Los Angeles in 1984, this version stands out from all others. Take our word for it.

Everything about this song is poetry in music. The tempo. The arrangements, Djavan’s lyrics, performance, and pacing.

Djavan sets the mood and ‘Esquinas’ begins its slow roll. The lyrics tell the story of forlorn love. You don’t need to know a word of Portuguese to understand it.

But then, halfway through the song, Marvin Gaye’s sideman Ernie Watts joins in. His tenor sax eclipses the singer’s lament with one of the most stirring and passionate solos you’ll hear in your lifetime.

So when you are sharing a special moment this Valentine’s Day, now you know.

‘Esquinas’ is what the silence in your togetherness is for.

Rightly or wrongly, so many of Antonio Carlos Jobim’s songs have come to be defined by the English lyrics they’ve inherited from American writers Gene Lee or Ray Gilbert. And not just Jobim.

Incidentally, Ivan Lins was initially less than pleased with the English version of ‘Começar de Novo’ when it became ‘The Island’. His original story of a romance that had run its course was turned into a tale of newfound love. The English lyrics completely reversed the song’s perspective.

Reportedly, Lins changed his tune (but not the words) after Barbra Streisand recorded it.

Basically, Jobim usually had no such qualms about his songs and when it came to ‘Dindi’ none were needed. Gilbert’s artistic translation was both masterful and elegant. “Oh Dindi, like the song of the wind in the trees, that’s how my heart is singing Dindi. Happy Dindi, when you’re with me Dindi.”

Jobim the composer no doubt approved of the translated story penned by Jobim the friend.

You see, ‘Dindi’ was inspired by Antonio Carlos Jobim’s friendship with Sylvia Telles, a rising-star vocalist who was beginning to hit her stride. Telles had debuted a dozen and a half of Jobim’s songs as her popularity grew. Jobim was impressed and he wrote the song ‘Dindi’ as a gesture of thanks. Actually, the song was named after a Fazenda Jobim visited from time to time. But then, it quickly became Sylvia’s nickname.

Telles loved the song and recorded it for her album The Music Of Mr. Jobim By Sylvia Telles. A series of concerts and club dates followed before a tragic accident claimed her young life a week before Christmas, 1966.

“Don’t you know, Dindi? I’d be running and searching for you. Like a river that can’t find the sea, that would be me without you, without you, Dindi”…

How did Alexia Bomtempo achieve success in Brazil at such an early age? First, this Brazilian American singer and songwriter was born in Washington, DC. Secondly, her dad is Brazilian, and her mother is American. Finally, she spent her formative years growing up in Brazil. Now she’s appearing on our Rhythm and Romance Showcase 22 video list with a heartwarming love song in Portuguese.

“I’ve wanted to be an artist for as long as I can remember and was very fortunate to be raised in a home where we constantly listened to great records,” she says.

The song is short and sweet, making it a perfect addition to your ‘rhythm and romance’ personal playlist.

Musical video showcases like ‘Rhythm and Romance Showcase 22’ are what we do. Why don’t you join us? 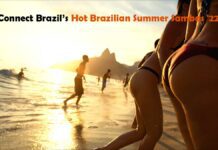 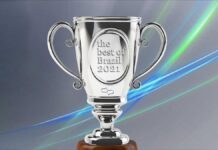