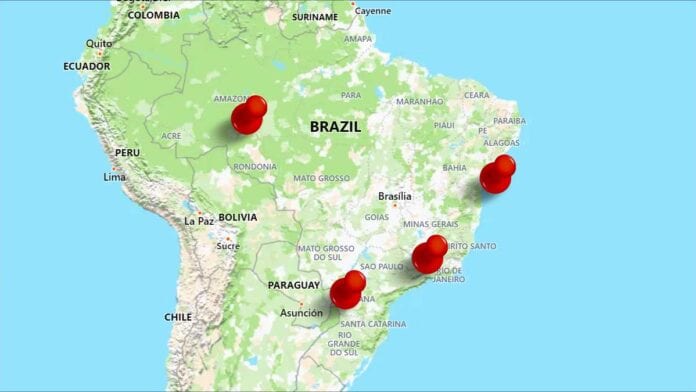 Brazil’s four epic adventures are here for you to discover. Relive these true-life stories of exploration, recreated in diary form.

Why April? Because April 22nd marks Brazil’s official Day of Discovery observed to commemorate the official discovery of Brazil by Portugal’s Pedro Álvares Cabral in 1500.

Today, the joy of discovery is quite different for most of us. It usually comes in the form of a recommendation from friends: a new restaurant or a video gone viral.

Our world is smaller – what took the Portuguese Empire months can now be accomplished in just a few hours, flying in first-class comfort if you so choose. Or mere seconds at the computer or with your smartphone

Over the years, I’ve made other Brazilian discoveries by setting off on my own: reading, learning, traveling with friends. And I came up with a novel idea.

What if I presented a few of these Brazilian discoveries as if we were reading the daily diaries of the explorers, as it happened?

I hope you’ll enjoy them, day by eventful day.

Friday, March 9th, 1500. Navigator Pedro Álvares Cabral set sail with a fleet of 13 vessels from the port of Lisbon, charged by Portugal’s Emperor to follow in the wake of his fellow Portuguese explorers Bartolomeu Dias (the first sailor to round Africa’s Cape of Good Hope) and Vasco da Gama, who initiated the trade route to India.

Within a period of 15 short years, Dias and da Gama had elevated Portugal to world power status and Cabral was eager to make his mark.

He tacked along Africa’s coast until he reached the Cape Verde Islands, then turned southwest into the unknown. A few weeks later, Cabral’s lead ship sighted mountains on the horizon and several days later his fleet sailed into a large bay, which would later be given the title of Porto Seguro.

It’s that day, April 22nd, that Brazil annually celebrates ‘Discovery Day’. The day the Portuguese landed in the southern part of the state of Bahia.

Day 1: We set sail from Lisbon under the command of Pedro Alvares Cabral with sunny skies and cheery dispositions all. Our fleet is quite a sight – fully 13 ships and more than 1,000 men. Expectations and spirits are high for this journey to India, which many have only dreamed about. I had a vision of a woman falling – with arms outstretched – towards the earth. What could it mean?

Day 2: The Straits of Gibraltar are coming off our port side this afternoon and for many, this will their last familiar sight on this mission of discovery. We learned that we’re following the course of Vasco da Gama, and this news is comforting. Africa lies ahead – a continent filled with rhythms and melodies, which are somehow compelling.

Day 3: Clear horizon at seven bells this day. Ship’s routine is settling in and time and tide seem to be with us as we prepare for a new day. Seagulls show us that the African coast is not far off.

Day 4: We’re west of the Canary Islands to avoid rough currents, and stormy weather is ahead. But the troubadour’s song brings us calm: His voice is whisper-soft, yet he can be heard even below decks.

Day 5: Westerly winds are pushing our fleet into uncharted waters and we’ve spied land – perhaps an island – late in this day. Some say it’s India, but others think we’re looking at the Brazilian Horizon. I expect we’ll learn more tomorrow.

Day 6: An exciting new land has been claimed for Portugal! The inhabitants welcome us with gifts, food, and music, with the women of their number singing beautifully in unison – we’ve never heard anything like it!

Day 7: Our last night in Brazil before we sail for India’s spice trade, and our farewell includes music from one of our own – a Scandinavian living in London before he joined up with our expedition. Indeed, we have sailors from Spain, Italy, France, and Germany, too! What will the next adventure bring?

The Mouth Of A Great River

By 1501, the exploits of Italian explorer Amerigo Vespucci had come to the attention of the Portuguese crown, and he was commissioned to return to Cabral’s recently-claimed Brasil.

Ordered to pursue a southern tack to determine the size of this new land, Vespucci’s role as piloto brought Commander Coelho’s fleet to the mouth of a great river, that proved too irresistible to pass by.

Day 1: Three and a half weeks at sea (plus time well spent with Cabral in Cape Verde on the way home from his discovery of Brazil), we’ve charted our course south and west. Our navigator, Amerigo Vespucci has guided us to the mouth of a great river. The mountains which surround this area provide a stunning landscape, even prompting our commander Gonçalo Coelho to remark “This place might have a future!”

Day 2: January 22nd. We’ve joined Gaspar de Lemos’s expedition across the peninsula – a rugged hike – and now this huge expanse of water has been given a name: River of January. Some have suggested shortening it to simply ‘Rio’, which is Portuguese for any large body of water, not just rivers.

Day 3: The Tupininquim call this 19-mile-long bay Guanabara, and we’ve explored all 130 islands along with the surrounding forests and a tall, rough tree that yields a deep red dye. We’ve named it pau brasil and sent the first harvest back to Portugal just last week.

Day 4: The French have now joined our little settlement at the base of Sugarloaf Mountain. The view of the bay is spectacular. I wish we could say the same of our new European comrades: reports of pirating are commonplace, but my fellow countrymen seem to be more interested in the native girls.

Day 5: Amazing! The French, under their Viceroy Villegaignon have claimed our land and renamed it France Antarctique, establishing a fort on nearly Serigipe island. I guess our Portuguese leaders have been more interested in Bahia to the north.

Day 6: Today is the day! The Portuguese flag has prevailed and our settlement is now a city, named São Sebastião do Rio de Janeiro in honor of the Portuguese King. We’ll expel the French, resist the Dutch and pirate attacks, and build fortresses to defend the bay of Guanabara.

Day 7: We’ve discovered that there is no ‘river of January’ after all, but this giant bay surrounded by tropical rainforests, beaches and mountainous peaks will surely be the epicenter for one of most beautiful places in the world.

Taking a personal pause from the rigors of his presidency, Teddy Roosevelt boarded a steamship south, to spend time with his son Kermit, who was living in Rio de Janeiro.

There, the President met Brazil’s famed explorer, Candido Rondon who invited him to join a fateful expedition in search of an unmapped river of legend, deep in the Amazon basin.

Day 1: Losing his bid for a third Presidential term, Theodore Roosevelt has accepted an invitation to speak in Rio de Janeiro next month. He hopes to meet up with his son Kermit after a cruise up the Amazon river, but I suspect this itinerary will soon become too pedestrian for his adventurous spirit.

Day 2: February 1914. Our Rio visit brings an offer to join Brazilian Candido Rondon’s expedition to explore his newly-discovered river in the Amazon basin. Kermit will watch over his father’s welfare. Our group of 19 includes naturalist George Cherrie.

Day 3: Poor planning; that’s our first discovery. With provisons more suited for a New York tea-room and heavy, dugout canoes that cannot naviagte white water rapids, our sense of exploration has become somber. How will these next few weeks unfold?

Day 4: Rio de Duvida – River of Doubt – is an apt name for this powerful artery: Making less than a mile and a half daily, we’ve jettisoned most of the provisions to lighten the floating weight of our canoes. There is no need of biscuits and marmalade in the jungle heat.

Day 5. Our expedition has split up due to lack of supplies, with half trailing back to safety. The pace has slowed: Roosevelt has wounded his leg and Kermit worries over infection. And we’re building new canoes to replace those lost in the rapids.

Day 6: A battle against nature! We are besieged with insects, malaria, cannibals, and starvation diets. One of our group was murdered and one was swept away yesterday in the river’s torrent. Dear Roosevelt is near death and we fear each day for his life.

Day 7: Fate has smiled – we’ve met up with rubber tree-tappers who have and guided us down the rest of the river and treated Roosevelt’s severely infected leg. But will he live even five more years, to reach his 60th birthday? Or will the Amazon claim his life, too? Perhaps Brazil will rename the river as Rio Roosevelt in his memory.

The Waters of Iguaçu

Four decades after Cabral’s discovery of Brasil, the South American continent was the focus of the world’s most powerful nations. Portugal and Spain battled for dominance, while the English, Dutch and French did their best to establish themselves in the ‘new world’ to the south.

The problem for all these nations was how to interpret a declaration by Spanish-born Pope Alexander VI in 1494. The Treaty of Tordesillas set a firm boundary for Spain and Portugal when laying claim to new lands.

Now, these two world powers would come face to face yet again. But where were they, exactly?

Day 1: Only four days south of Rio and already our ship has found yet another river to explore. The Guarani Indians call it Iguacu or ‘great water’ and today we’ve learned of a large waterfall somewhere upstream.

Day 2: ‘Great water’ indeed! These falls span more than a mile and a half, and the sound is deafening. We’ve counted 275 separate falls in this panorama, set in the middle of an expansive rainforest. You should see the animal and plant life here!

Day 3: We’ve now learned that Spain’s Alvaro Nunes claimed these falls last year, in 1542, but as these waters divide Brazil from Argentina, we’re comfortable in staking our claim, too. Nunes called this place ‘Santa Maria’ but the name doesn’t fit.

Day 4: Settlers are arriving daily, ready for a new beginning. Hardwoods are the crop of choice as the falls provide fertile land all around. The Indians speak of the Yauarete, the Black Jaguar which prowls the rainforest at night.

Day 5: Guarani legend says that a god married a beautiful native girl named Naipú, but she fled upriver with her mortal lover in a canoe. the rage-filled god slashed at the river, creating the waterfalls, condemning the lovers to an eternal fall.

Day 6: Word of Iguassu has spread quickly, and visitors from Rio and Buenos Aires come for the spectacle.  They hike among the falls, take small boat excursions and delve deep into the jungles. First gold, then cattle… and now it has come to this!

Day 7: Paradise! This morning a flock of large toucans flew overhead as we explored the Atlantic forest. We’ve collected hundreds of butterfly species, and more than 350 different kinds of birds. Truly, there is no place like this on earth.

Stories like ‘Brazil’s Four Epic Adventures’ are what we do. Why don’t you join us?