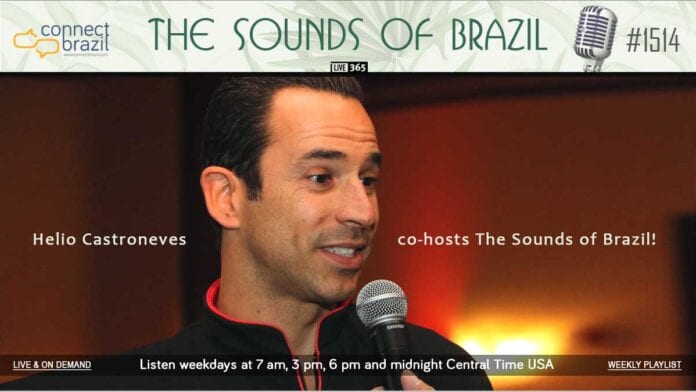 Live365.com is the official streaming radio partner for The Sounds of Brazil!

This two-hour program airs 4X daily on our streaming Station. Listen Monday to Friday at 7 am, 3 pm, 6 pm and midnight Central Time (US). Weekend times, too:

Until last Sunday, only three drivers had won the Indy 500 four times: A.J. Foyt, Al Unser and Rick Mears. Mario Andretti won the Indy 500 once, falling into victory lane with a backup car.

Helio Castroneves is the only active driver with a shot at more than three wins. And when he was released from Penske Racing last year, the general thinking was that Helio’s time had passed him by: “If he couldn’t win with Penske…”

So this year, Castroneves took an offer for a handful of races (including the Indy 500) with a bootstrap team, Meyer Shank Racing. He started well, stayed out of trouble, and took the lead on the last lap to win.

“The other drivers were playing checkers while Helio was playing chess,” observed two-time winner Paul Tracy, who had his own Indy 500 history with Helio Castroneves.

Helio Castroneves joins The Sounds of Brazil as co-host

I’ve known Helio for quite a long time, and three weeks after his first Indy 500 win in 2000, I invited Helio to co-host my weekly radio show. He even brought along his own music.

This week, I’ll replay that program – just as it aired originally – in honor of Helio Castroneves’s historic fourth Indy 500 win. Scroll down for listening times.

Be sure to join me for Brazil Back2Back, when Helio Castroneves brings a pair of his favorite Brazilian musicians to our streaming station this Friday (6/11). Top of the hour, at 11 am, 2 pm, and 5 pm CT for two in a row.

Friday’s Brazil Back2Back taps a pair of tunes from Djavn – including his new single penned by Torcuato Mariano – when you listen at the top of the hour at 11 am, 2 pm, and 5 pm CT, exclusively on our streaming station. Visit the Listening Lounge.

Sunday’s Brazilian Brunch features ‘Sao Paulo Sirens’ from the ranks of Brazil’s superstars! Only on Sundays at 9 am, 2 pm and 8 pm Central time and only on The Sounds of Brazil’s streaming station.

Set 1: Welcome To Our Second Hour

Next Week: June’s ‘Art of Brazilian Jazz’ theme continues with ‘The Best of guitarist Sandro Albert’. I hope you’ll enjoy the show and please – tell a few friends about us! It’s always great to share the music.

Whether it’s your radio, your computer at work or your tablet or smart phone, thanks for tuning in! I really appreciate it, and please tell a friend or two about us.

And don’t forget about our weekly broadcasts in Chicago: Sundays at 2:00 pm Central on 90.9 FM WDCB and wbcb.org. 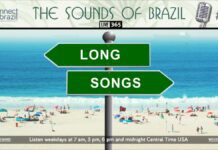 The Best of Brazilian Jazzmasters