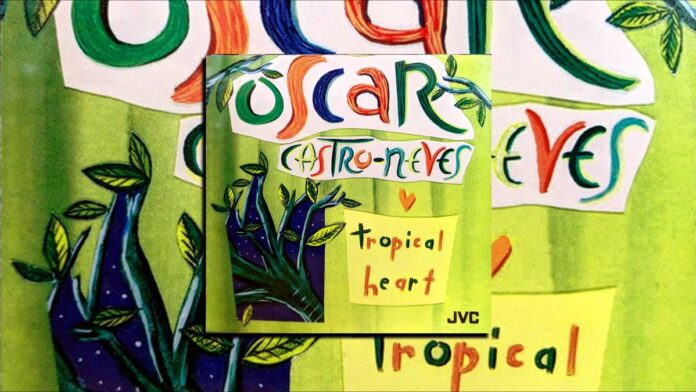 For all of his 53 years, Oscar Castro-Neves has an enthusiasm for life that is both infectious and unmistakable.

You can hear it in his voice – a pleasant warmth masking an inner intensity, almost as if the voice is holding his boundless energy in check. At once playful, excited, reflective, passionate, the voice is the man. You can hear the voice in his music, too.

It’s easy to get caught up, to be carried away when listening to Oscar’s latest JVC Music release, Tropical Heart. Melody and counterpoint flow and weave about like a Brazilian caipirinha, an unexpectedly smooth and deceptively potent mixture of freshly squeezed limes, sugar, and cachaça (a barely-aged sugar cane rum).

Oscar Castro-Neves has become a de facto Cultural Ambassador for Brazilian music on both continents.

Born in Rio de Janeiro on May 5, 1940, his musical career began at age 14, when he and his brothers formed their first group, gaining recognition on local radio and television shows and hanging out with guys named Gilberto, Bonfa, Jobim. Two years later, everything changed.

“We were just a bunch of musicians who played for the fun of it, showing each other what we’d come up with,” recalled Oscar. “You have to remember that all of these famous Bossa Nova musicians were 16 or 17 years, with the exception of Jobim. He was 30 at the time.” At a party one day, Alaide Costa, one of Brazil’s top singers at that time heard one of my songs, ‘Chora Tua Tristeza’ (Cry Your Sadness), and asked if she could record it. I was shocked. I said ‘Yes, of course, you can!’ Within a month, that song was number one and by the end of that year, there were over 50 different covers recorded. And there I was, only 16 years old with a big hit! It was unbelievable.

Carnegie Hall started it all

“The legendary Bossa Nova concert at Carnegie Hall in 1962 led to a tour with Stan Getz, and eventually, to Sergio Mendes. Joining Brazil ’66 as the featured guitarist, musical director, and orchestra conductor brought him to Los Angeles to stay in 1967 and elevated him to prominence within the music industry. In his ten years with Mendes, he recorded 15 albums and traveled to every major city worldwide, including a 32-concert tour with Frank Sinatra.

Through his years of development as a skilled composer, arranger, producer, group leader, and performer, Oscar Castro-Neves has touched on many musical styles, from soundtracks to pop acts, but has never lost touch with his native Brazil.

He produced a song with Randy Crawford for the movie Stake Out. His many film scores include Gabriela and Blame it on Rio. He’s worked as an orchestrater on What About Bob, Short Circuit II, Dirty Rotten Scoundrels, Problem Child, K-9, L.A. Story, He Said, She Said, and most recently on Sister Act 2.

His documentary work includes Burning Down Tomorrow, (nominated for an Oscar of its own) and Reflections Through A Brazilian Eye, an Emmy nominated television special for KCET in Los Angeles. These projects have helped him to develop his writing and arranging skills.

Oscar’s career as a solo artist with JVC began in 1989 with the release of Brazilian Scandals, and Maracuja later that year, both of which were re-released on the domestic JVC Music label earlier this year.

More Than Yesterday followed in 1991. This latest effort, Tropical Heart encompasses both his talent as a guitarist and his history as a musician and is the culmination of the musical exploration undertaken in his earlier recordings for JVC.

Gone are the lilting string passages so beautifully orchestrated in Brazilian Scandals and the synth-based fullness of Maracuja.

Instead, Tropical Heart is a stunning collection of 12 originals penned by Oscar (with Don Grusin’s ‘Envelope’ making it a baker’s dozen), concentrating on an acoustic blend that is simple, clean, and surprisingly reminiscent of his larger group sounds.

The album highlights Oscar’s solo performance as never before. “There’s no doubt that acoustic music is coming back into the limelight,” says Oscar. “These days, I’ve been lucky to be able to work with real strings and wind instruments on my movie projects, as opposed to synthesizers, and that’s led to the fresh acoustic sound on Tropical Heart.”

Oscar Castro-Neves’s Tropical Heart opens with the breezy and confident ‘Holding With An Open Hand’ based on the chorinho style of the Brazilian northeast. The solo guitar theme recalls a Brazil before Bossa Nova, when small regional groups would serenade the town folk underneath their windows or gather for an impromptu community dance.

Here, Oscar is featured with both his acoustic and electric nylon-string guitar in a graceful duet that sets the mood for the rest of the album. And in keeping with Oscar’s playful nature, the melody becomes its own accompaniment, as a second theme is brought to life.

Another highlight of Tropical Heart is Kate Yani Markowitz’s warmly bittersweet vocal on ‘The Dance is Over’. Seems like everybody likes a sad love song, and this one is irresistible.

Oscar’s account of how he came to write this one: “That song is built around an original lyric written for Ivan Lins’ ‘The Island’ (Comecar de Novo) but it was never recorded.

So one day, Kate came to me with the lyrics. After we discussed what they meant, I took them home and wrote a completely different song around them, keeping the same cadence as before. The challenge was to make it alive, make it meaningful on its own,” he said. “I think we’ve all been in the position of having been in a relationship that is over, and not able to accept that fact. So the question is: why do we still keep hoping? We can all relate to that, I think”

Just as with guitarist Eric Gale and woodwind player Glen Garrett, Don has been part of Oscar’s small group sound since Maracuja. The same is true for bassist Abraham Laboriel and drummer Alex Acuna.

This three-way relationship brings a balanced creative control to Tropical Heart. “These guys know Brazil inside out,” said Oscar. “About four years ago, I took Don, Abe, and Alex to the Brazilian Jazz host, and in a place where you have pianists, drummers, and bass players galore, they just killed everybody. There were standing ovations all over the place for all of them. They understand the Brazilian heart very well.”

As Cultural Ambassador, Oscar Castro-Neves not only understands the Brazilian heart, he helped create a good amount of it. His work with harmonica master Toots Thielemans as co-producer (with Miles Goodman) of The Brasil Project and The Brasil Project, Volume 2 has received critical acclaim and has brought thousands of fans back to Brazilian pop music.

His unique interpretation of these Brazilian standards has introduced at least that many more to artists like Caetano Veloso, Joao Bosco, and Edu Lobo. He has just traveled to Brazil to produce a special live tribute to Antonio Carlos Jobim as part of Brazil’s largest jazz festival, and he’s rounded up a few friends for the occasion; guys named Hancock, Mulligan, Hubbard, Acuna, Carter, and Henderson.

All these aspects of Oscar are reflected in Tropical Heart. As he says, “I wanted Tropical Heart to be a glimpse into my own heart, what I’d like to give back for all that I’ve gotten from life. The music is just bits and pieces of what I am. I’ve learned to be more self-accepting, and I think that my music reflects that. I know that I’m the same person on stage as off, I don’t have a stage persona. I am Oscar at all times…”

Reviews like ‘Oscar Castro-Neves’s Tropical Heart’ are what we do. Why don’t you join us? 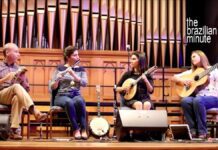 The Best of Kenia’s Brazilian Jazz

The Best of Kenia’s Brazilian Jazz