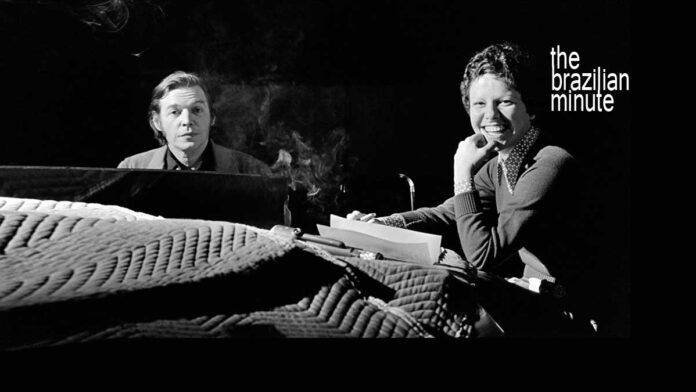 Antonio Carlos Jobim’s song about the joys and challenges of life celebrates its 50th anniversary this year.

The Waters of March Is Brazil’s Most Popular Song, according to newspapers, journalists, scholars, and Brazilian music fans everywhere.

This week’s Brazilian Minute: The Waters of March Is Brazil’s Most Popular Song

It happened on a rainy day in March 1972 when Jobim was frustrated with the stormy weather. Things were not going his way. So, he sat down and began to write.

‘Águas de Março’ tells the story of the cycle of life. The song’s simplicity is also what makes it popular worldwide. There’s meaning in each phrase.

There are thousands of versions for ‘The Waters of March’ in more than a dozen languages, but Jobim’s duet with the legendary Elis Regina is the most famous, and the one that makes it Brazil’s most popular song!

More on: The Waters of March Is Brazil’s Most Popular Song

It wasn’t a good one. The song’s initial release hinged on a music entrepreneur with a good idea and bad timing. Amazingly, it worked out very well for MPB singer and songwriter João Bosco. Why? Tap or click here to read about it on this page.

Weeks later, Elis Regina recorded her version on her self-titled album ‘Elis’. Meanwhile, Antonio Carlos Jobim was headed to a New York studio to begin work on his self-titled album Jobim. In Brazil, the album was titled Matita Perê and both releases contained a newly-recorded version of ‘Águas de Março’.

The US release also contained the English version of ‘The Waters of March’.

Fans, critics, and music historians alike marvel at the lyrics of this song in English or Portuguese. Many note that there is not really a story being told, as much as a poetic stream of thought.

The meter of the phrasing in ‘Águas de Março’ is slightly different when compared to the English version, ‘The Waters of March’.

However, Jobim – who authored both sets of lyrics – set the phrasing with purpose. He also made allowances for the differences between the two languages.

With the Portuguese version, nearly every line begins with “É..” (It is).

This simple choice amplifies the importance of the noun or the action of each phrase. The idea works well with the English version, too.

50 years on, the relevance and wisdom of Jobim’s observations about life remain unmatched in the lyrics of a song.

Within months of those early releases, both ‘Águas de Março’ and ‘The Waters of March’ found their way onto new recordings by Sergio Mendes, Stan Getz, and João Gilberto.

And it wasn’t just musicians who were taking notice.

In 1985, Coke used the song with rewritten lyrics on a summer “Coke Is It” TV campaign. The ad made its US debut on ABC-TV, on January 20th, during the Super Bowl XIX live broadcast. Unique versions in Portuguese for “Coca-Cola é Isso Aí” also aired on Brazilian TV for several years, with lyrics written by Nelson Wellington.

The Philippine shopping mall chain, Ayala Malls created their own ad version of ‘The Waters of March’, and even an ‘unauthorized’ bootleg commercial for Trader Joe’s has racked up more than a million views on YouTube in the past few years.

There are many hidden stories connected to Antonio Carlos Jobim’s ‘Águas de Março’ and we’ve taken great care to research fact from fiction.

No, the lyrics are not haiku. No, it is not a song about climate change.

‘The Waters of March’ is Brazil’s most popular song because of a duet recorded for an album (Elis & Tom) in Los Angeles, 1974. It united two of Brazilian music’s biggest names, Antonio Carlos Jobim and Elis Regina.

The backstory of how this fateful meeting occurred is here, and it should not be missed.

A few days after Elis Regina arrived in Los Angeles to meet with Jobim, Cinematographer Roberto de Oliveira packed up his cameras and flew to L.A. He was there to film a documentary on the making of Elis & Tom for TV Bandeirantes in Brazil.

For many years, this historic documentary was unavailable to the public. However, we have unearthed the complete 46-minute TV show, as originally produced for broadcast.

You’ll find it directly below. Enjoy!

Did you enjoy ’The Waters of March Is Brazil’s Most Popular Song’? If you did, why not join us at Connect Brazil?