a symbol of modernity Looks To The Future

The story of Brasília is as epic as it is unique, and the result of a centuries-old dream.

This week’s Brazilian Minute: The Story of Brasília

Fanning out across the Brazilian highlands deep in the country’s north-central interior is the capital city of Brasília.

In 1956, President Juscelino Kubitschek kept his promise to move the capital of Brazil from Rio de Janeiro, inland.

Brasília was built from the ground up in four short years. The new center of Brazil’s Federal, Legislative, and Judicial branches was inaugurated on April 21, 1960.

Brasília! Brazil’s 3rd most populous city, a UNESCO World Heritage site, and the realization of a national dream.

The Story of Brasília

The story of Brasília is as epic as it is unique. The idea of creating a Federal District and a capital city in the nation’s interior came from the 18th century. Once implemented, it took less than five years to move from promise to creation. Remarkably, that’s an architectural and technological feat unequaled in our modern world.

Let’s explore the story of Brasília.

An Idea, A notion, And A Promise: A Capitol On The Move

One of the oldest cities in the Americas, Salvador, Bahia became the first capital of Colonial Brazil in 1549.

Rio de Janeiro became Brazil’s second capital in 1815, after the arrival of The Royal Court of Portugal. It also served as the capital of the Portuguese Empire and in doing so, it made history. Rio de Janeiro holds the title of being the only European capital to exist outside of Europe.

But the first mention of relocating the Brazilian capital was in 1789. The idea came from one of Brazil’s most honored visionary national heroes, Joaquim José da Silva Xavier. Known as Tiradentes, he led the Inconfidência Mineira movement which supported freedom for Brazil.

An inland capital for Brazil was revived in 1822 with the release of the “Memoir on the Necessity and Means of Building a New Capital in the Interior of Brazil”. Its author was a prominent proponent of independence, José Bonifácio de Andrada e Silva.

His writings became the first official reference to not only the idea but also the location. But, again, the notion was set aside when Silva left Brazil under threat of exile.

Brazil officially became a republic in 1889 and the idea of an inland capital was included in its constitution in 1891. By 1892, the location for Brazil’s future capital and Federal District was surveyed and selected.

Federal laws were enacted in 1922 and again constitutionally ratified in 1934, and 1946. All that was needed was the promise of a visionary leader, and Brazil found one in 1955.

The Story of Brasília And Juscelino Kubitschek

Brazil faced economic hardship after World War II. However, the foundations for growth were well-established when Governor Juscelino Kubitschek decided to run for President in 1955.

Kubitschek’s slogan, “Fifty Years of Progress in Five”, was meant to modernize Brazil and energize the spirit of the country. And the primary goal of JK’s plan was to finally give Brazil its long-awaited capital city.

Planning began in 1956 with a promise to the Brazilian people. The new capital of Brasília would be completed and inaugurated on April 21, 1960. This date marks the Brazilian nation’s oldest national holiday, Tiradentes Day, to honor his death and the Inconfidência Mineira movement.

Brazil And The USA: Constructive Corporation

Urban planner Lucio Costa and landscape designer Roberto Burle Marx were selected for the site in Goias State. Also selected was architect Oscar Niemeyer, whom Kubitschek knew from his years as Mayor of Belo Horizonte.

Work for Brasília and Brazil’s Federal District began in February 1957.

Brazil’s long friendship with the US helped in the creation of Brasília. The isolated location required roads and an airport. It is said that the US Army Corps of Engineers airlifted the heavy earth movers needed to open the site to the rest of Brazil.

We know that Cornell University assisted the Brazilian government with critical aspects of terrain stability. Impressively, a young graduate student named Hollister Kent was an Army-trained expert in analyzing aerial photography. He was brought to the site as a structural advisor.

The Story of Brasília: Design

The design of Brasília created the first of many unique aspects of this capital: Brasília is the first modern city designed to be viewed from high above.

Costa created the design in 1957, writing that the new, unnamed capital would be born of “two axes crossing at right angles, the very sign of the Cross.”

But is it? Kubitschek’s push for progress resulted in the world’s first modern, planned city. As a result, many think that the design resembles a jet airliner flying across the Brazilian plateau. It is also thought that the design is a soaring bird; honoring Brazil’s flora and fauna, and its indigenous peoples.

Costa designed every aspect of Brasília, right down to the bus driver’s uniforms, including a dark grey cap. His concept was simple: every element should be planned in harmony with the overall design of the city.

The Story of Brasília: Urban Planning

A masterpiece of modernism and urban planning, each of Brasília’s two axes holds specific functions.

Accordingly, governmental agencies for cultural, administrative, recreational, and economic management are placed within the east-west axis. Residential, retail, service, and commercial districts and transportation corridors are placed along the curved north-south axis.

Importantly, Brasília was added as a UNESCO World Heritage Site in 1987. UNESCO notes: “The city’s planning is noteworthy for the remarkable congruence of Lucio Costa’s urban design (the ‘Plano Piloto’) and Oscar Niemeyer’s architectural creations, …the new approach to urban living embodied in the Neighborhood Units (Unidade de Vizinhança) and their corresponding Superblocks (Superquadras).”

5 Things to See and Do In Brasília

Designed by Oscar Niemeyer, this distinctive and modern building consists of a flat structure with two tall buildings. These hold offices for members of parliament are located. Interestingly, the National Congress is also the home of the federal senate.

Known as ‘Memorial JK’, this park-side setting is dedicated to the first president of the capital city of Brazil. You’ll see a 12-foot statue of Juscelino Kubitschek as well as his final resting place.

Elegantly designed by Oscar Niemeyer, this spectacular house of worship was inaugurated in 1970 and remains one of the architect’s most-admired works. A visit will amaze your senses due to its perfect acoustic clarity and impressive visual cues.

There’s a lot to see and do here. Brazil’s three seats of power are located here, in the Square of the Three Powers.

Surrounding this park are the buildings supporting the executive, legislature, and judiciary branches of government. You’ll see the official residence of the President of Brazil, (Palácio do Planalto), Brazil’s Supreme Court (Supremo Tribunal Federal), and the National Congress (Congresso Nacional).

Pay a visit to the Historical Museum of Brasília to immerse yourself in its story. Be sure to spend some time at the Pantheon of Freedom (Panteão da Liberdade). It honors Brazil’s Heroes and defenders of Democracy. The first floor is dedicated to President Tancredo Neves who died soon after his election. The upper floor holds exhibits for the Inconfidência Mineira movement.

Brasília’s home to the Ministry of Foreign Affairs is perhaps Oscar Niemeyer’s most inspiring design. Framed by a beautiful reflecting pool it impresses as the epitome of modern design in harmony with its surroundings.

The Story of Brasília

Did you enjoy ’The Story of Brasília’? If you did, why not join us at Connect Brazil? 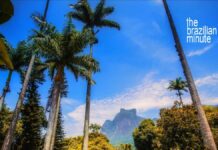