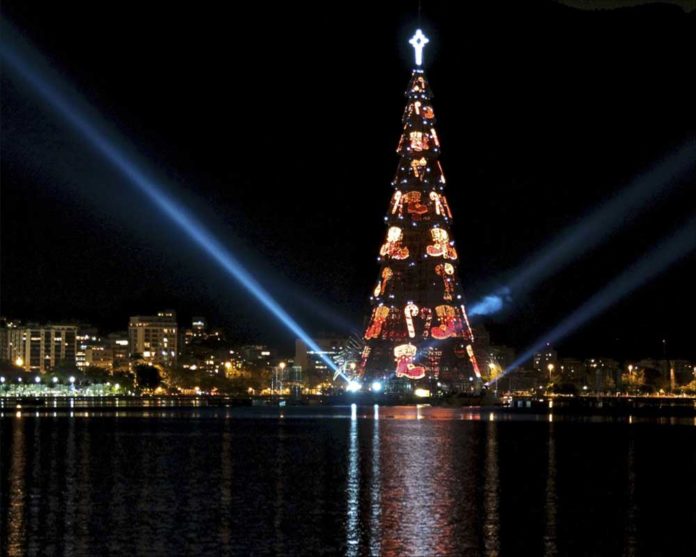 Christmastime is here, and in the city of Bossa Nova’s birth, that means the lighting of Rio’s iconic Christmas tree.

The family-friendly event took place in the inland, lake neighborhood of Lagoa on Saturday, December 1st under the watchful glow of Corcovado’s Cristo Redentor statue high above.

2018 marks the 20th year for the popular seasonal event, which is ranked as the third most popular for the city’s annual free celebrations, behind only Carnaval and the New Year’s Eve festivities on Copacabana Beach.

But it comes after a two-year absence as the city of Rio de Janeiro dealt with the inevitable financial pushback from hosting the Summer Olympic Games in 2016.

Last month, a new sponsor, Petrobras, stepped forward to underwrite Rio’s iconic Christmas tree and Luiz Fernando Pezão, the Governor of the state of Rio de Janerio, was on hand to make a statement.

In an interview with The Rio Times, Pezão said, “The return of Rio’s iconic Christmas tree is a sign of the recovery of the state of Rio de Janeiro. We have lost R$40 billion in revenue in the past four years, but we are still here.”

Alexandra Jackson is a Celebrity Contributor at Connectbrazil.com

Take a cab to reach Zona Sul’s thriving and trendy Lagoa neighborhood. Lagoa is home to some of Rio’s best restaurants and nightlife, including the Blue Note Rio.

Then, find a good viewing location somewhere around the lake’s 4.5 mile circumference.

The floating tree is the world’s largest, drawing several hundred thousand spectators to witness the beginning of the Christmas season and the unofficial start to summer in Brazil.

How big? The Guinness Book of World Records lists Rio’s iconic Christmas tree as topping out at 279 feet.

In keeping with Carioca custom, the brightly-lit tree floats slowly around the Lagoa Rodrigo de Freitas lake in Rio’s Zona Sul (South Zone) throughout the month of December and into the New Year.

Free concerts and other performances always surround the tree lighting. A spectacular fireworks show emanating from the Christmas tree followed to mark the official start of the holiday season in Rio.

Connectbrazil was the first to post this fan video of the entire experience.